Manchester United host Sunderland on Saturday afternoon for an English Premier League clash. Blacks Cats' manager Steve Bruce and the likes of players Wes Brown, John O'Shea, and Kieran Richardson will be returning to Old Trafford where each spent years plying their trade in the famous United red shirt. The two sides met twice last season in league ties: the first was a goalless draw at the Stadium of Light and the return fixture saw Dimitar Berbatov bag a brace during a 2-0 United victory. Saturday's match will be the last for each before the upcoming international break.

The Reds come into the tie 2nd in the league table behind Manchester City. Their most recent league clash was a gritty 1-0 away victory over Everton FC. In the UEFA Champions League, United are level with Benfica on points but top Group C on goal differential. During the midweek, United defeated Romanian champions Otelul Galati 2-0 at Old Trafford. Manager Sir Alex Ferguson's side also advanced to the quarter-final of the Carling Cup last week after defeating League Two side Aldershot Town 3-0. It has been a grind as of late, but the Reds have rebounded to record three straight victories in three different competitions since their 1-6 derby disaster versus City.

Injuries were quite the nuisance to United defense in the early portion of the season and now injuries appear to be limiting Fergie's selection choices for central-midfield. Anderson is doubtful for this Sunderland tie after picking up a knock versus Galati on Wednesday. Tom Cleverley hobbled off the pitch last weekend at Goodison Park and he is unavailable as well. Ryan Giggs is recovering from a hamstring and this further limits options. Michael Carrick has been dealing with a knock too but he is expected to be available for selection on Saturday. Darren Fletcher's status for the match is uncertain as he was reportedly not available versus Galati. Winger Ashley Young and defender Chris Smalling continue to be out with injuries as well. Striker Michael Owen is also out after coming off early in the match versus Galati due to a thigh injury.

It has been a disappointing start to the season for Sunderland as they currently sit 14th in the table after 10 league matches. However, despite sitting this low in the table, the Black Cats own a +2 goal differential. Their most recent league fixtures have seen them draw 2-2 with Aston Villa, defeat Bolton Wanderers 2-0 away, and be defeated by Arsenal 2-1 at the Emirates. Sunderland bowed out in Round 2 of the Carling Cup after losing 1-0 to Brighton in August.

Injuries are a major concern for Sunderland at one position -- goalkeeper. Current No 1 Simon Mignolet suffered a broken nose last weekend versus Villa and he is out for Saturday's match. The goalkeeper who actually wears the shirt with No 1 on it -- Craig Gordon -- is also out recovering from a knee injury. Trevor Gordon is out as well due to a back injury. Striker Fraizer Campbell appears to be unavailable due to a knee injury. Defender Titus Bramble is also unavailable for selection because of the current sexual assault charges that have been made against him.

Fergie is likely to deploy his side in a 4-4-2 shape but a 4-3-3/4-5-1 sort of shape is possible as well. No 1 David De Gea is likely in goal but backup Anders Lindegaard is a possibility as well if the former is rested. In central defense, captain Nemanja Vidic will start and he could be partnered by either Rio Ferdinand, Jonny Evans, or Phil Jones. The latter could also be selected at right-back as could Fabio. Patrice Evra is expected at left-back. As mentioned earlier, Fergie's choices in central midfield appears to be limited. Carrick could start if healthy and it could be Rooney that once again drops into the center of the park -- just as he did versus Everton last weekend and versus Galati during the midweek. Fletcher is a possibility to start if fit enough as is Ji-Sung Park. Out wide, the Korean may be selected to play on either flank as could Nani. If United play in a 4-3-3/4-5-1, youngster Danny Welbeck could be chosen as a wide forward. Up front, Rooney is certainly a possibility as is Welbeck, Javier Hernandez (Chicharito), and Dimitar Berbatov.

For Sunderland, they too could choose from either a 4-4-2 or 4-5-1 shape. Bruce has elected to play in a 4-4-2 shape for his side's past two matches. In goal, Keiren Westwood will start after making his league debut last weekend after Mignolet's injury. In central defense, old United boy Wes Brown and Michael Turner are expected to the pairing. At both full-back positions, two more former Reds are expected to start -- Kieran Richardson at left-back and John O'Shea at right-back. In central midfield, it is David Vaughan and Jack Colback that have started each of the past two matches and they can reasonably be anticipated to start there again. If Bruce decides to play three in the central midfield, Lee Cattermole could be selected to provide bite. Out wide, Sebastian Larsson and Stephane Sessegnon are likely to start. Each have played on both flanks but Larsson on the right and Sessegnon on the left has proven to be successful during the past two weekends. The latter can be expected to tuck in centrally and in an advanced postion when Sunderland are in possession -- the resulting shape can look like a 4-3-1-2 with Sessegnon in behind the pair of strikers. Up front, Nicklas Bendtner is expected to start and if a second striker is chosen, 18-year-old Connor Wickham is expected to be selected. 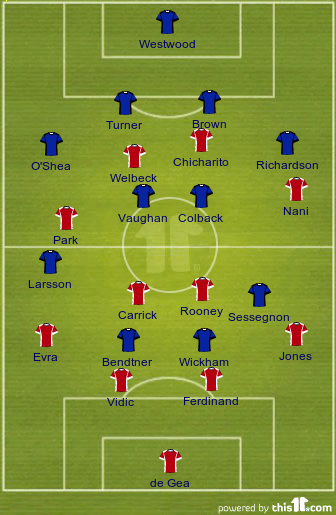